The state and local government 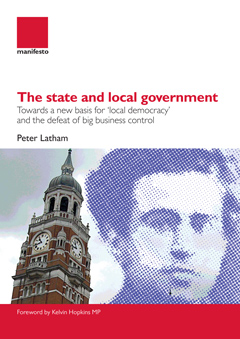 The striking continuity between Cameron’s ‘big society’ and New Labour’s ‘neo-liberal’ project for governance gives a special relevance to Peter Latham’s study The state and local government. Beneath the rhetoric of devolution and empowerment real power is evacuated to the central state and displaced to corporate capital. Proceeding from the famous dictum of Marx; ‘All science would be superfluous if the outward appearance and the essence of things directly coincided’ Latham demonstrates the foundation – in the particular neo-liberal forms assumed by ‘state monopoly capitalism’ – of the local governance in Britain and other countries. Theoretically, the study is located firmly in a rigorous address of Marxist theories of the state and argues that “superstructural” readings, which exclude political economy, misrepresent Antonio Gramsci.

The author’s conclusions are rooted in a long intellectual and political engagement with the theory and practice of local governance and assert the continuing relevance of Gramsci’s theory of the historic bloc in devising strategies to contest the convergence of Britain’s three main parties around the surrender of local democracy to big business control. Grounded in up-to-the minute election results and policy initiatives the book includes a comparative analysis of the local governance in Britain and South Africa, a survey of ‘socialist decentralization’ models in China, Kerala, Cuba, Venezuela and Porto Alegre and a detailed analysis of local election results. It concludes with policy proposals for a new basis for ‘local democracy’ and the defeat of big business control embodied in the measures proposed by the Conservative-led coalition government.

Dr Peter Latham is a sociologist whose thesis on Theories of the Labour Movement in the 1970s used Antonio Gramsci’s concept of the “organic” working class intellectual to explain twentieth century rank and file movements in the British building industry. A former researcher on direct labour at the London School of Economics he then taught housing policy to students working in the public sector – when he was Secretary of Lewisham Trades Council and a lay activist in the National Association of Teachers in Further and Higher Education – before becoming a full-time official in the University and College Union. From 1999 to 2006 he was Treasurer and then Secretary of the Labour Campaign for Open Local Government. His previous publications include The Captive Local State: Local Democracy under Siege (2001) and New Labour’s US-Style Executive Mayors: the Private Contractors’ Panacea (2003). He is also a member of the Communist Party's Economic Committee, the Labour Land Campaign and Croydon Trades Union Council’s Executive Committee.