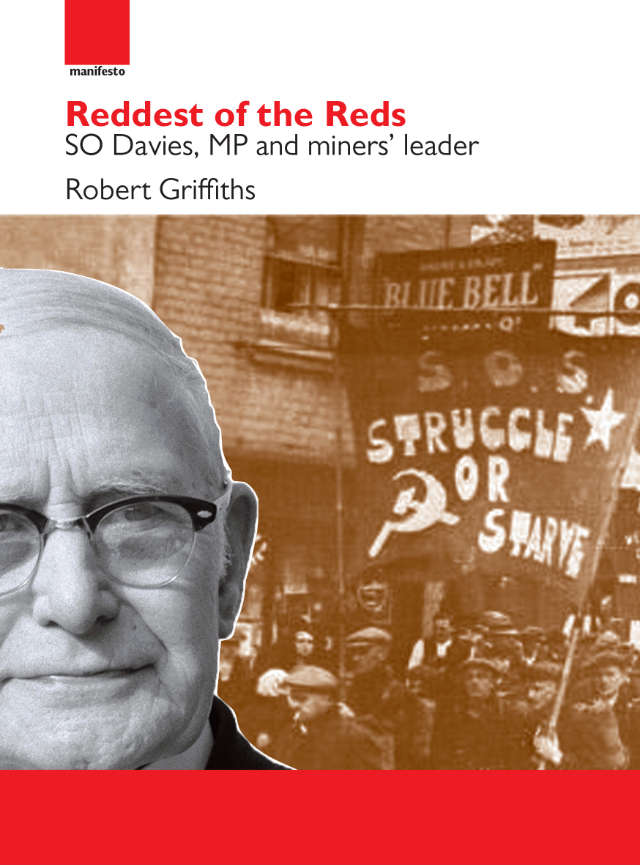 Reddest of the Reds
SO Davies, MP and miners’ leader
by Robert Griffiths
STEPHEN OWEN DAVIES was one of the 20th century’s great rebels.  Robert Griffiths biography tells his story.
From working underground at the age of 12, he rose through the ranks of the South Wales Miners Federation and the Miners Federation of Great Britain. The police and intelligence services tried to disrupt his work with the Red International of Labour Unions and the League Against Imperialism.
As the Labour MP for Merthyr Tydfil and a comrade of Aneurin Bevan, he campaigned inside and outside parliament against the Poor Law and the Means Test, and for the rights of workers, women and the unemployed. During the Great Depression, his efforts helped prevent the abandonment of Merthyr Tydfil as a living, working community.
He went to Nazi Germany to demand the release from prison of Communists and trade unionists.
Labour leader Clement Attlee disowned him when he called for the US embassy and military bases to be closed following the ‘cold-blooded murder’ of the Rosenbergs. He led the charge against the alleged use of biological weapons in the Korean War.
As a Welsh patriot and international socialist, SO Davies defied his party to propose a Parliament for Wales Bill in the House of Commons.
As an acquaintance of Pandit Nehru and Paul Robeson, he exposed the crimes of British imperialism from India and Ireland to Cyprus and Kenya.
As a friend of the ‘Red Dean’ of Cantebury, he supported the Soviet-backed world peace movement and opposed NATO, nuclear weapons and the European Common Market. No disciplinary action by the Labour leadership could stem his rebellions.
When Harold Wilson's government raided the Aberfan Disaster Fund to clear the tips above the village, he launched his final revolt.
In the 1970 General Election, young campaigners and a one-line election address helped him—as an 89-year old ‘Independent Socialist’—trounce the official Labour candidate by 7,000 votes.
360 page 20 illustrations
ISBN 978-1-907464-41-6
£19.50 + £2.80 p+p   €21 + €4.50 p+p
Designed by RocketTheme