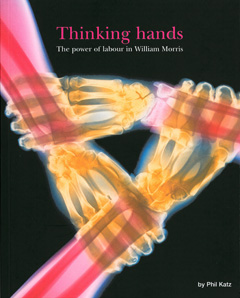 William Morris had an abundance of ideas that were a constant challenge to workers in the Nineteenth Century and remain so for the Twenty-first.

This is the thesis advanced by Phil Katz, in a book which is a celebration of Morris, and at the same time an affirmation of hopes which do not die, in spite of all the onslaughts of external capital.

'Useful work' was the credo that Morris gave to a Labour movement which was increasingly being shaped by people who were labelled as 'unskilled'. Katz tells us that "Morris saw a need to bring the skills of both brain and hand to the work". He believed "that everyone could acquire a range of crafts and that they should seek out work best suited to their talents, rather than let work define them".

Today, useful work is harder and harder to find. Legions of wage slaves toil in call centres designed to foist unwanted consumer objects or services on reluctant targets, whose leisure and privacy are violated in the process.

Katz shows us how neatly complementary are the views of Morris and Marx.   It was, after all, Marx who wrote that:

Phil Katz does not simply juxtapose thoughts from Marx and Morris: but he strikes sparks from them to invite us to develop their dialectic. The old Institute for Workers' Control wrote on its banner a celebrated dictum of Morris's: "No man is good enough to be another man's master."

Katz invites us to go beyond this in exploring how new generations can learn new approaches to work and skill, industry and technology, politics and trade unionism.

Thinking Hands invites us to explore the thought of William Morris as a guide to Twenty-first Century thinking.